Day seven of GLAD has been filled with all things Gulfport thus far. The day’s first development was the (scheduled) addition of a 12th member of the science staff: Darek Bogucki out of Texas A&M University. Quickly on the heels of his arrival came the presentation/question session with members of our funding agency, the Gulf of Mexico Research Initiative (GoMRI), and reporters/cameramen from local news organizations. Topics at the session ranged from drifter construction and deployment to the bigger-picture impact of the GLAD and CARTHE in general.

The guests were friendly, asked questions, listened attentively, and stayed a long time. Being isolated for just over six full days had put me in a bit of an aquarium state of mind, so it was good having other people come along when they did and tap on the glass. After the tide of reporters and administrators had receded, Gulfport beckoned from across the shipyard’s vast and hot expanse. The allure of lunch away from the Walton Smith had absolutely nothing to do with escaping our own cook’s meals. Rather, the prospect of testing claims of oyster excellence (and the opportunity for a change of scenery) proved powerful enough to spur on our exodus. The oysters were pretty darn good. And I daresay that my locally-made brown ale was among the better brews I’ve tasted. Good work, Mississippi.

Post-lunch activities involved planning for the imminent drifter hunt (and high-resolution GT-31 GPS recovery) for the PVC members of yesterday’s “S1” deployment. Aye, our next task is somewhat of a wild goose chase- one where the geese are taped and strapped to the tops of floating plastic tubes that obey the fickle whims of salinity gradients. At least our geese are equipped with flashing LEDs and honk at our satellites once every five minutes. That much is reassuring.

Dr. Brian Haus and I took advantage of the dock’s proximity to the ship to calibrate and co-locate our cameras. After creating a two foot by two foot grid and positioning it within the cameras’ field of view, we measured the distances and angles required for further calculation. Plainly put, this step will allow us to project the rectangular image captured by a camera into its actual footprint on the water’s surface. Since we can’t suspend the cameras directly above the area being sampled, this step in the calculations is essential if we’re to extract physically meaningful information from our recording devices. 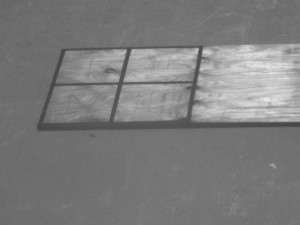 Polarimetric camera with our grid in its field of view Photo taken at the same time as the previous one but with the infrared camera. Note the difference in scale and position. That, along with the apparent deformation of the grid based on angle and position relative to the camera lenses, will need to be accounted for in the final calculations.

The Walton Smith requires a bit of work that can’t be done out in the Gulf, so we’re dockside for the near future. I suspect that we won’t linger too long into the evening, but deadlines and schedules on these sorts of journeys can and will change without too much notice.

Nathan Laxague signing off (somewhere between Biloxi and the bayou).