As of 4:15 PM Eastern Daylight time, our construction for drifter deployment S2 had been completed. Well, half-completed. One half of the sails were left off to allow for compact storage and to decrease damage to drifters while the ship is in transit. The bulk of the legwork is done and our precious fiberglass is no longer in peril of snapping due to high winds or the ship’s motion. Anyway, the second construction party proceeded much like its predecessor: stations were set up in the dry lab for assembling sails and attaching floats before the empty bodies were fitted with a GPS device and sealed.

The musical accompaniment to our building efforts came from a hodgepodge playlist made of musical donations from the other scientists. Gluing and fitting was done to a musical slurry containing everything from Jack Johnson (not mine) to Tom Waits (definitely mine) tunes. Now, at the time of my writing (a little over two hours past completion of drifter construction), we are fairly far into a pre-S2 CTD survey.

Augmenting our pre-deployment data collection efforts is the new sensor that Dr. Derek Bogucki (a guest star who first made his appearance in Episode 7) brought aboard. The device uses a tightly-packed horizontal band of lasers and sensors to measure miniscule variations in seawater refractive index (here a function of local temperature). 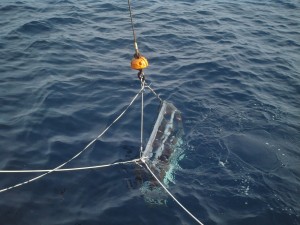 The objective: to quickly sample turbulent structures of varying length scales. Of course, our camera array on the 01 deck will be running concurrently with the turbulence sensor to bolster the base of information we have for these target, small-scale processes. Tomorrow we deploy the fruits of today’s labor. Tonight, we eat. I’ve been told it’s something Italian that involves flank steak. Needless to say, I’d better stop writing before this blog becomes a puff piece for the food on board the Walton Smith.

Nathan Laxague signing off (somewhere between shutting off the polarimetric camera and eating pignola).