Morning brought Gulfport, MS. Gulfport, MS brought visitors to the ship. Today’s gaggle of visitors was made up of scientists and representatives from the NRL (Naval Research Lab). After a brief tour/presentation much in the mold of last week’s version, we were off to Historic Gulfport. Same restaurant, different table (the oysters were too good to pass up). In the meantime, the ship was refueled, re-stocked, and re-organized. For those curious about the workings of commercial ports, our science staff donned reflective vests and were escorted across 1000 feet of concrete lot by T.W.I.C. (Transportation Workers Identification Credential) card-holding crewmembers. Protocol was upheld and the Chiquita boat remains unmolested.

As of 5:30 PM local time, the Walton Smith is beginning the haul out of Gulfport’s excessively long channel (you might be able to see the thing from space). We are on our way back to the De Soto Canyon, where the powers that be have planned our third deployment to take place. In a change from the original, three-S deployment schedule, however, the CARTHE bigwigs have decided to add a fourth drifter launch. The remaining 90+ drifters will be split between drop #3 (three sets of three sets of three sets of drifters, or a 27-strong triangular, quasi-fractal node) and a cyclone-chasing deployment southwest of our current location. This is where the importance of the LSS (large scale survey) comes into focus: deployment plans were changed on the fly in an effort to capture and map features very recently detected. The 63+ drifters left over after tomorrow’s operation will be cast directly off the Walton Smith on a long, slicing ship trajectory that takes us across the cyclone in question. The hope: by judiciously spreading out our remaining resources we will be able to paint a more complete picture of the physical transport processes at play in this stretch of the Gulf. Sounds good to me (I just drop the things in the water). 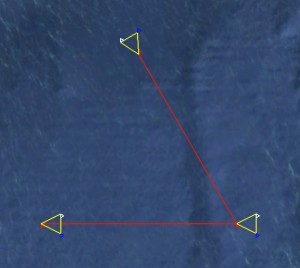 For the portion of this blog’s readership that has been following the UDM saga, recent developments have made the sensor’s status (in scientist-ese) inconclusive. That means it’s probably definitely not an error with the code and certainly maybe an issue with the electronic connections. I think.