Welcome to the CARTHE GLAD blog!

Day one of our intrepid expedition has gone swimmingly (figuratively speaking). As of 17:00 UTC, we were steaming down the coast of Southeast Florida under 85 degrees and 70% humidity. I assume that our hug-the-coast trajectory is an anti-foul conditions measure, but there’s a small part of me that suspects it is to maintain TV reception for some scientist’s surreptitious viewings of “Cajun Pawn Stars.” 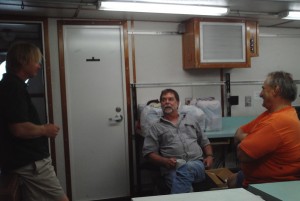 In any case, the day has already seen safety and information briefings, installation of the starboard bow-mounted UDM (ultrasonic distance meter), and a full-blown fire drill. The drill was an absolute necessity- safety is of paramount importance for the crew and passengers of a 92 foot research vessel (to say nothing of the Vitamin D supplied to the more model-oriented scientists).

Sea-sickness, for the moment, holds no sway over your author. A quick and unofficial poll of the R/V F.G. Walton Smith’s inhabitants revealed that 100% of scientists and crew members had held onto their lunch (Cobb Salad today), so morale is quite high. In that vein, the ship’s size, stability, and amenities insulate us quite well from the rigors of life on the high seas. Few ships boast both a snow-cone station in the laboratory area and the deck space and crane capabilities to construct and deploy 300 Lagrangian drifters across an area hundreds of square miles in size. 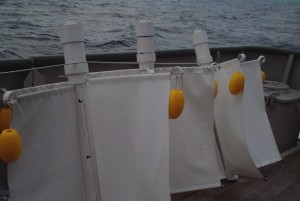 Assembled drifters on the main deck of the RV Walton Smith

Fully assembled drifters are quite space inefficient for on-ship transport, so each of the three large deployment (90 drifters per) operations requires an assembly line for its preparation. This involves attaching the sails (these sails sit below the water line), affixing the floats, and pinning the disparate parts together for security. 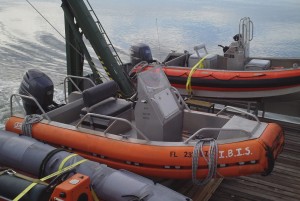 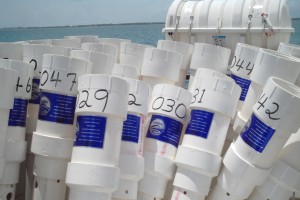 The PVC bodies for the drifters 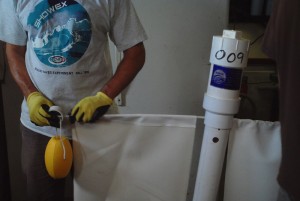 The drifters are assembled on the boat

Of course, a drifter isn’t worth the PVC that built it if it doesn’t contain its brain. In this case, that “brain” supplies the data that is the raison d’etre for the GLAD- a SPOT GPS unit made for two months of operation. Each SPOT (more commonly a fixture on the Appalachian Trail than the De Soto Canyon) sends its “emergency” latitude-longitude signal to our team back at Virginia Key once every five minutes. Twelve times per hour, twenty four hours per day, seven days per week, four weeks per month, two months (projected) per experiment. That’s a bit north of 16,000 real-life data points for the modellers to devour and digest. Current construction has us building the 20 drifters needed for the LSS (Large Scale Spiral) deployment that will, unsurprisingly, take our ship on a large spiral path south of Louisiana.

In situ (Latin for “in site-” evidently the Romans stole more words from the English language than we give them credit for) measurements of meteorological quantities are made through sensors mounted on our manually installed mast. Carbon dioxide and water vapor concentrations are measured through the LICOR device; temperature and relative humidity are probed with a Rotronic sensor; two separate radiometers measure incident solar radiation; a sonic anemometer measures and relays the three Cartesian components of wind velocity (incredibly helpful for air-sea nteraction calculations involving the ubiquitous “wind stress”). The UDM mentioned earlier is extended outwards across the starboard bow on a metal beam. Twenty times per second, the device polls the water surface with ultrasonic pulses, relaying to our data acquisition system wave height information (making the data ripe for wave spectrum analysis). Additionally, IR (infrared) and polarimetric cameras are side rail-mounted for measurement of cool skin effects and analysis of small wave structure.