The Consortium for Advanced Research on the Transport of Hydrocarbon in the Environment (CARTHE) is a research team dedicated to predicting the fate of oil released into our environment to help inform and guide response teams, thereby protecting and minimizing damage to human health, the economy, and the environment. 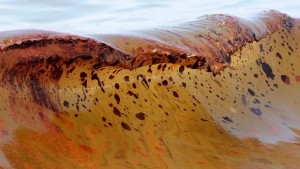 On April 20th, 2010, America’s Gulf Coast experienced the largest oil spill in the history of the American petroleum industry. The millions of gallons that were discharged into the Gulf’s waters resulted from the explosion of the Deepwater Horizon drilling rig, which caused the Macondo wellhead to burst. The resulting oil spill posed a threat to communities living along the coastlines of five Gulf states – Louisiana, Alabama, Florida, Mississippi and Texas, as well as their fisheries and marine ecosystems.

The Consortium for Advanced Research on Transport of Hydrocarbon in the Environment (CARTHE) is funded by the Gulf of Mexico Research Initiative (GoMRI) following a competitive peer-review process for the purpose of studying the oil spill and its impact on the Gulf’s delicate ecosystems. CARTHE’s scientific work is based on one of GoMRI’s intellectual themes and focuses on the physical distribution, dispersion and dilution of petroleum, its constituents and associated contaminants under the action of physical oceanographic processes, air-sea interactions and tropical storms.

The CARTHE team is comprised of over forty scientific researchers, postdocs, students and administrative staff from fourteen universities and research institutions. Collectively, CARTHE’s researchers possess both the scientific and technical knowledge required to effectively execute the in-situ and computational experiments that will help uncover the answers to many pressing questions in the field of Physical Oceanography and Atmospheric Science. The team’s areas of expertise include oil transport processes, oceanic and atmospheric turbulence, air-sea interactions, coastal and nearshore modeling and observations. The key to solving tomorrow’s spill-related problems lies in the research that CARTHE is conducting today.