The CARTHE team of world renown scientists is known for our ground breaking ocean current research in the Gulf of Mexico and the new technology we have developed to make these breakthroughs.  So when Vizcaya Museum & Gardens and Frost Museum of Science in Miami, FL wanted to know where the trash they find in their mangroves or on the beaches was coming from, they turned to CARTHE, the ocean current transport experts.

Unfortunately, there is little know about the currents in Biscayne Bay.  It is under funded and under studied and changes like the Port of Miami dredging project and sea level rise alter the circulation patterns so what was known may not hold true anymore.

The University of Miami Rosenstiel School-based CARTHE team joined forces with Vizcaya and Frost Science and create the year long Biscayne Bay Drift Card study (BayDrift). The goal of the project is to understand our local ocean currents and how trash and other pollutants are transported. We wish to add new observational data to the existing models in order to give the greater Miami area a better sense of how the currents are effecting the way particles move in Biscayne Bay.

Motivation: While in the planning stages for this trash/marine debris project, South Florida was also dealing with a tritium leak from the Turkey Point nuclear power plant, a waste water leak from an old pipe near downtown Miami directly into our study area, as well as an enormous blue-green algae bloom prompting Governor Scott to declare a state of emergency for Martin, St. Lucie, Palm Beach, and Lee Counties.  A better understanding of the currents in these areas can assist decision makers and managers in addressing their response to such events.

The Project Team coordinates quarterly deployments of drift cards (small wood cards that float on the surface and are found by citizen scientists/beach goers) and GPS-equipped drifters (buoys that move with currents and send their location back to scientists every 5 minutes for weeks) with scientists, students, families and members of our local community in 11 locations across Biscayne Bay (near Miami, FL). 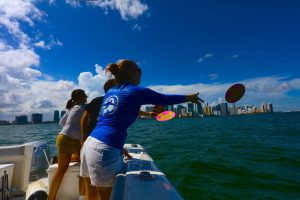 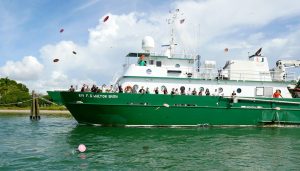 Special thanks to VolunteerCleanUp.org and Key Biscayne Community Foundation for spreading the word about the BayDrift study, as well as Wendy Teas/NOAA Sea Turtle Survey and Guillaume Novelli/CARTHE for finding so many of the cards!

For more information on the study including data as it comes in, visit: CARTHE.org/BayDrift

Keep your eye out for our drift cards!  Report them to Instagram #BayDrift or BayDriftMiami@gmail.com. 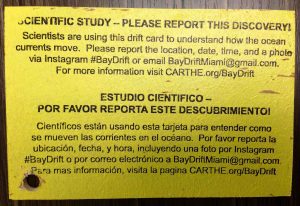