Have you seen these drift cards? 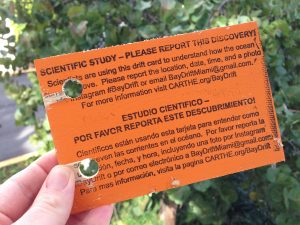 Be on the look out for the Bay Drift drift cards.  Scientists need your help in locating these small, eco-friendly wood cards, as part of a scientific experiment studying our local ocean currents.

The Biscayne Bay Drift Card Study (#BayDrift) is a collaborative community science project studying the current flows in Biscayne Bay in order to better understand how trash, sewage, oil, and harmful algae blooms get transported through South Florida waters by the wind and ocean currents. The effort is led by CARTHE (Consortium for Advanced Research on Transport of Hydrocarbon in the Environment) at the University of Miami, Vizcaya Museum and Gardens, and the Patricia and Phillip Frost Museum of Science.

On Friday, December 9th, 280 small, eco-friendly wood cards were released into Biscayne Bay from 7 sites near downtown Miami by students from elementary to high school. The “drift cards” are brightly painted and float along the water’s surface, moved by the currents. Each card is coded so the project team can identify where it was deployed. By tracking the location where drift cards are released and found, we will learn how the currents distribute debris in Biscayne Bay.

ate goal of the project is to advance our understanding of the area’s flow patterns, demonstrating how the ocean and bay currents transport various substances, but also to give students a hands-on STEAM activity (Science Technology EngineeringArt Math). By hosting informative art events at Vizcaya, the Ramble at Fairchild Tropical Botanic Garden, the Miami Science Barge, Nerd Nite Miami, the Key Biscayne Citizen Scientist Lecture, and Art Miami at Art Basel, as well as partnering with the youth poetry competition, Piano Slam, the backs of the drift cards are full of colorful images and inspiring poetry. Over 100 of the cards feature poems written by Piano Slam students inspired by the music Migrant Voyage by Manuel Valera and the migration of the ocean currents. The Bay Drift team hopes these eye catching additions will increase the chance of the cards being discovered and reported to the scientists.

This is the second #BayDrift release to date. The first took place on September 12, 2016 and 38 cards were reported, some very close to the release point and some nearly 70 miles away. CARTHE scientists also released 15 biodegradable, custom-made, GPS-equipped drifters, providing detailed tracks of their journey. Preliminary analysis shows that most of the drifters remained inside the Bay for much longer than some predicted. This could have important implications for resource managers and decision makers in the event of some type of spill inside Biscayne Bay. 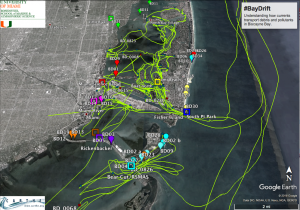 The colored squares represent the starting location. The colored dots represent the location where drift cards were recovered by citizen scientists. The green lines indicate the path the GPS drifters took after the September 12th release. Four of the fifteen drifters made it into the Gulf Stream and traveled north.  The majority remained inside the Bay.

If you find a drift card, you are asked to report the location, data, time and a photo using #BayDrift or BayDriftMiami@gmail.com.  For more information on the Bay Drift study, visit www.CARTHE.org/BayDrift.