After months of planning, preparation, and testing, the CARTHE team has set off for the Gulf of Mexico to conduct another large scale experiment.  The Submesoscale Pathways and Lagrangian
Analysis on the SHelf (SPLASH) experiment will take place west of the Mississippi River, south of Grand Isle, Louisiana, and will examine how ocean currents transport oil and other particles across the shelf and onto shore, bridging the gap between the offshore observations from GLAD and LASER and the coastal observations from SCOPE.

The overarching scientific objectives for SPLASH are to: (a) determine the cross-shelf transport of surface material (eg. oil) from the shelf break to the shore; (b) measure surface transport processes in sufficient detail to address the physical processes and guide dynamical models; (c) obtain unique air-sea interaction fluxes under the influence of small scale horizontal gradients in wind, waves, and density, and (d) numerically predict the key processes important for oil transport. 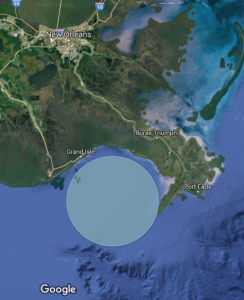 Survey area west of the Mississippi River Delta (MRD) within the Louisiana Bight.

SPLASH is led by CARTHE co-PI Jeroen Molemaker, a senior researcher at UCLA in physical oceanography, who additionally holds a position of international chair of excellence at the University of Brest, France. His specialty is the dynamics of ocean physics at sub-mesoscales. Small scale processes in oceanography present a particular challenge as they are diffi 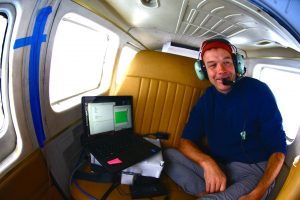 cult to observe, are often beyond the resolving power of satellite observing platforms and need extremely high resolution computer models to be accurately represented. In 2011 and 2013 he co-designed SUBEX, the precursor of the LASER and SPLASH experiment, which involved the coordinated observations of multiple aircraft, boat observations and drifter deployments. He is the chief scientist of SPLASH and is very excited to be part of both the CARTHE experiments, which present a rare opportunity to do observations that involve a large number of uniquely qualified scientist from a wide range of top research institutes in the country. Already, the LASER experiment that took place in the winter of 2016 is providing us with new insights in transport phenomena at small scales at the ocean surface and we expect to push the boundaries of knowledge even further in SPLASH.
Stay tuned for more updates as the experiment gets underway

Grand Isle, LA (home base) with Gulf of Mexico in the background. Taken by our hard working drone team!