National Geographic has sponsored over 250 “BioBlitz” events across the country. A BioBlitz brings a community together to survey a particular area, identifying as many plants and animals as possible.  The Vizcaya BioBlitz in Miami, FL took place on May 13-14, 2016.  Scientists, families, and students found 168 species in less than 50 acres, which included bay, mangroves, hardwood hammock.  Unfortunately, they also found quite a bit of trash…. so that’s where we come in! Where did the trash come from that washes in from Biscayne Bay? 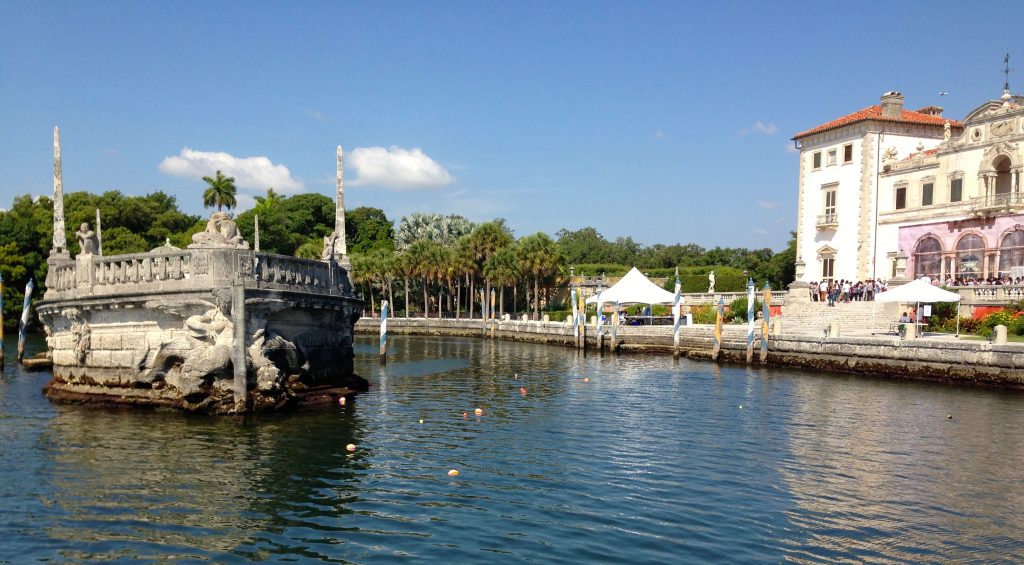 Vizcaya Museum and Gardens was the winter estate of James Deering, built in 1916. Today, the Vizcaya staff are focused on preserving the natural landscape as well as the home. They contacted CARTHE last year asking if we could tell them where the trash was coming from that consistently collects in their mangroves and boat basin. Since Biscayne Bay is understudied and the computer models are not as accurate as we’d like, we did not have a straight forward answer for them, but we were inspired to work with them to find out!

CARTHE’s outreach manager, Laura Bracken, spoke to 150 sixth grade students on day 1 of the BioBlitz and dozens of families and citizen scientists on day 2. She explained CARTHE’s mission – predicting the fate of oil (or any pollutant/trash) in the environment – and conducted a simple yet fun activity with coconuts.  Uniquely painted coconuts were tossed into the water by the participants and tracked for a few hours.  Depending on the tide, winds, and currents, the coconuts collected in different parks of the basin. 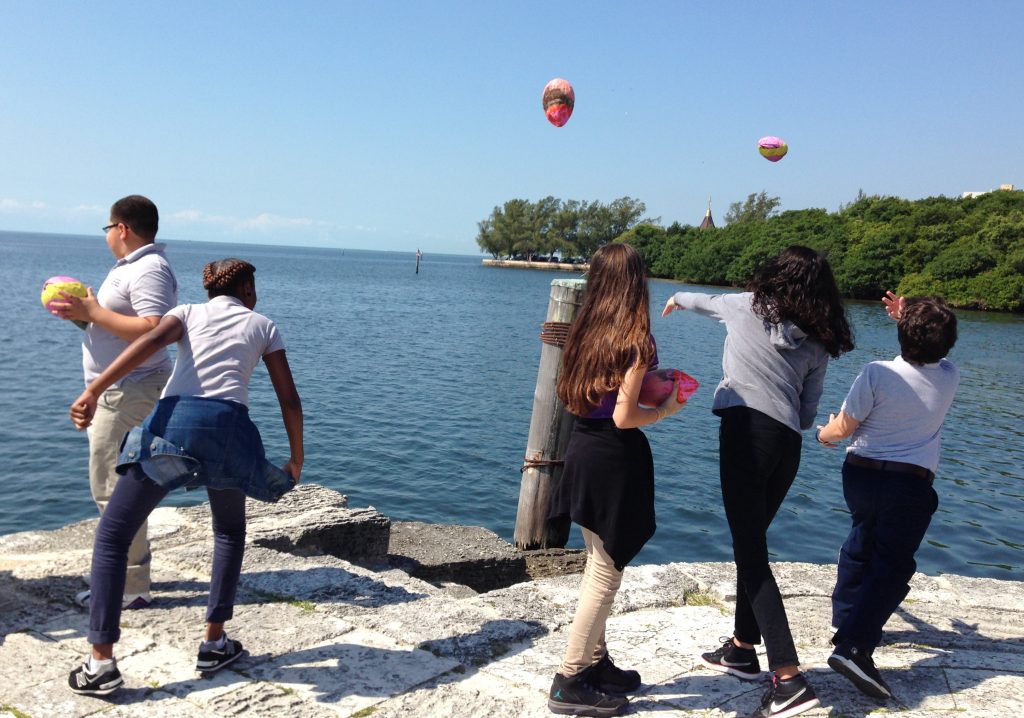 Sixth graders launching their team’s coconuts into the Bay 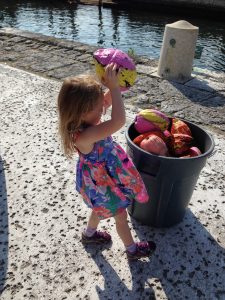 An eager scientist selecting her coconut for the experiment 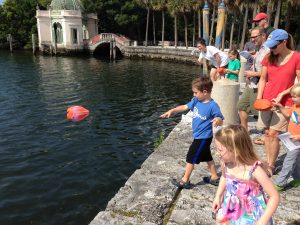 After throwing the coconuts into the water, most of the participants visited other activities (fish identification, bird spotting, entering their discoveries into the app, iNaturalist).  Then they returned to see where their particular coconut had gone.

Most of the 10am coconuts collected by the steps, and the 11am and 12pm coconuts remained in the center of the basin. This is mostly due to the change in tides.  Additionally, the coconuts that were tossed closest to the barge were protected from the wind and current moving through the basin so they remained up against the barge.  Many factors contribute the the movement of trash, oil, even fish. 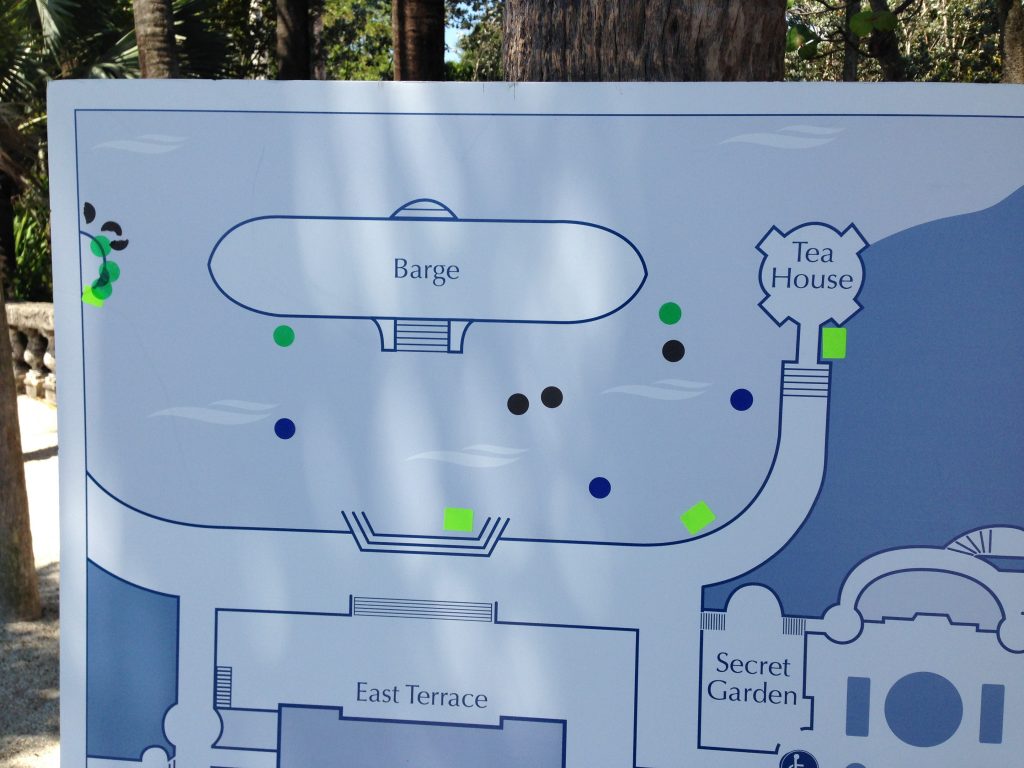 Students marked the location of their coconuts after 2 hours 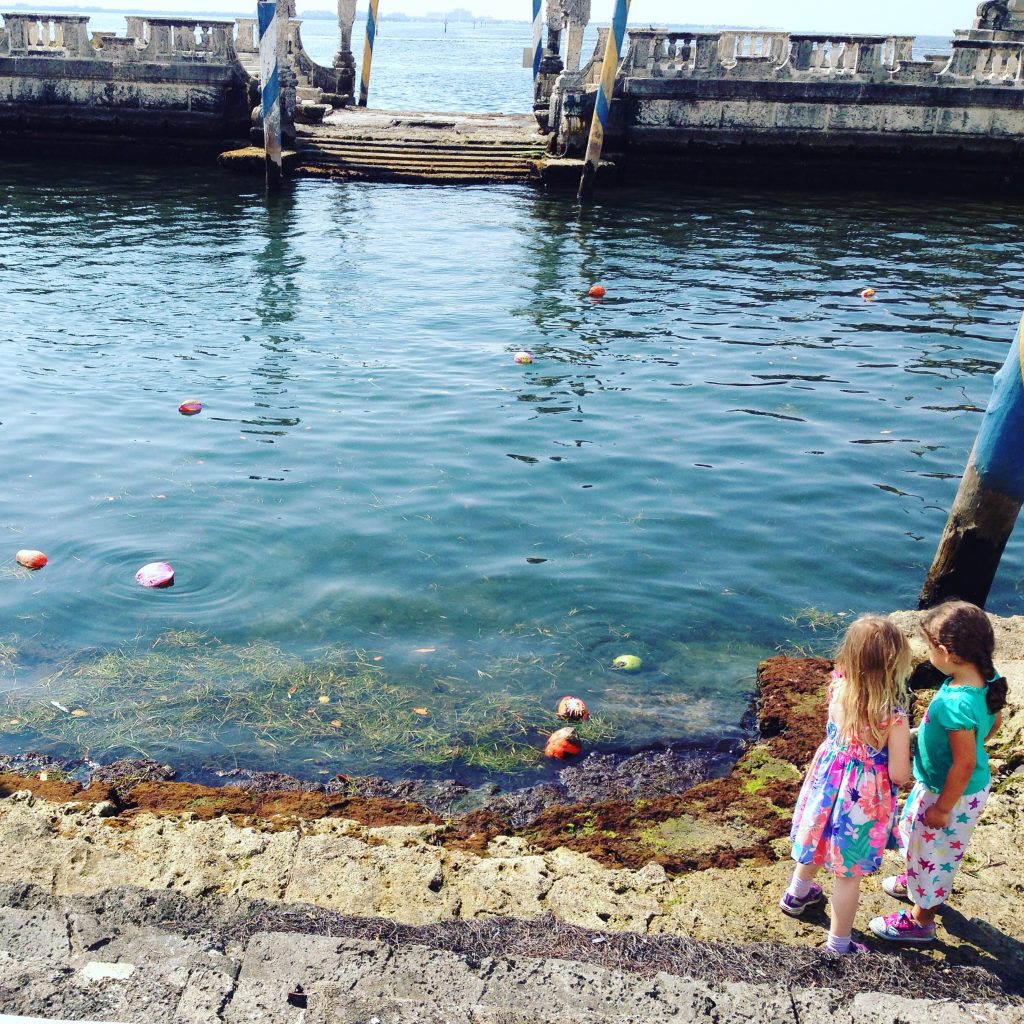 Surveying the area to track the movement of their coconuts 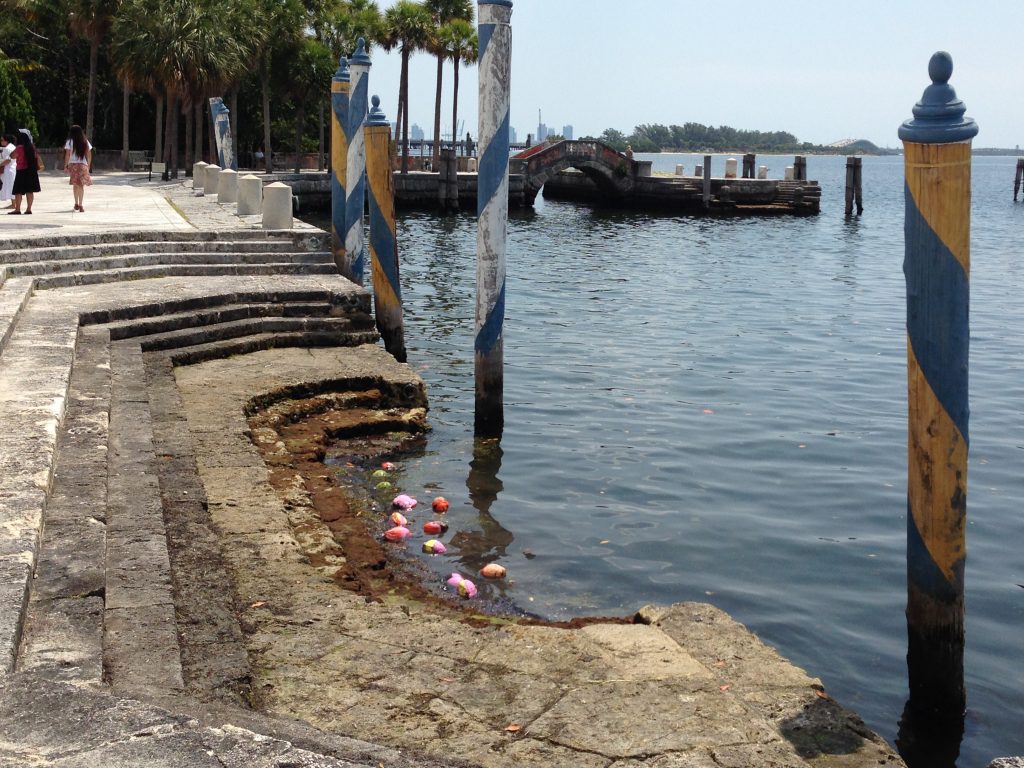 Most of the 10am coconuts collected by the steps, and the 11am and 12pm coconuts remained in the center of the basin. 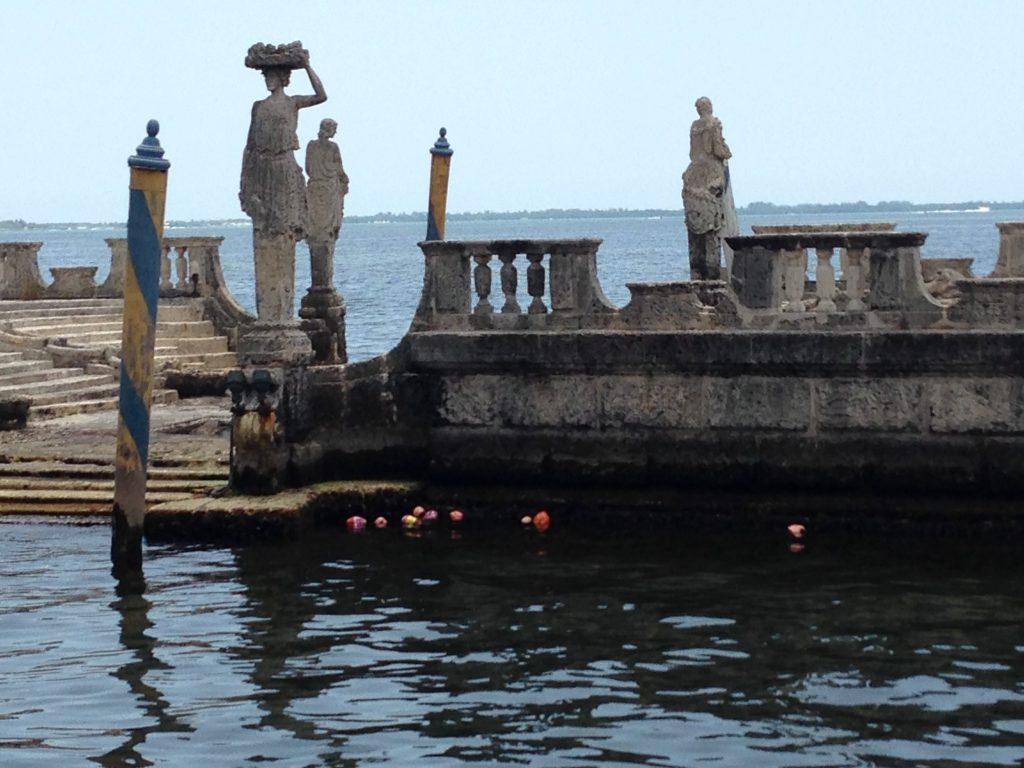 The coconuts that were tossed closest to the barge were protected from the wind and current moving through the basin so they remained up against the barge. 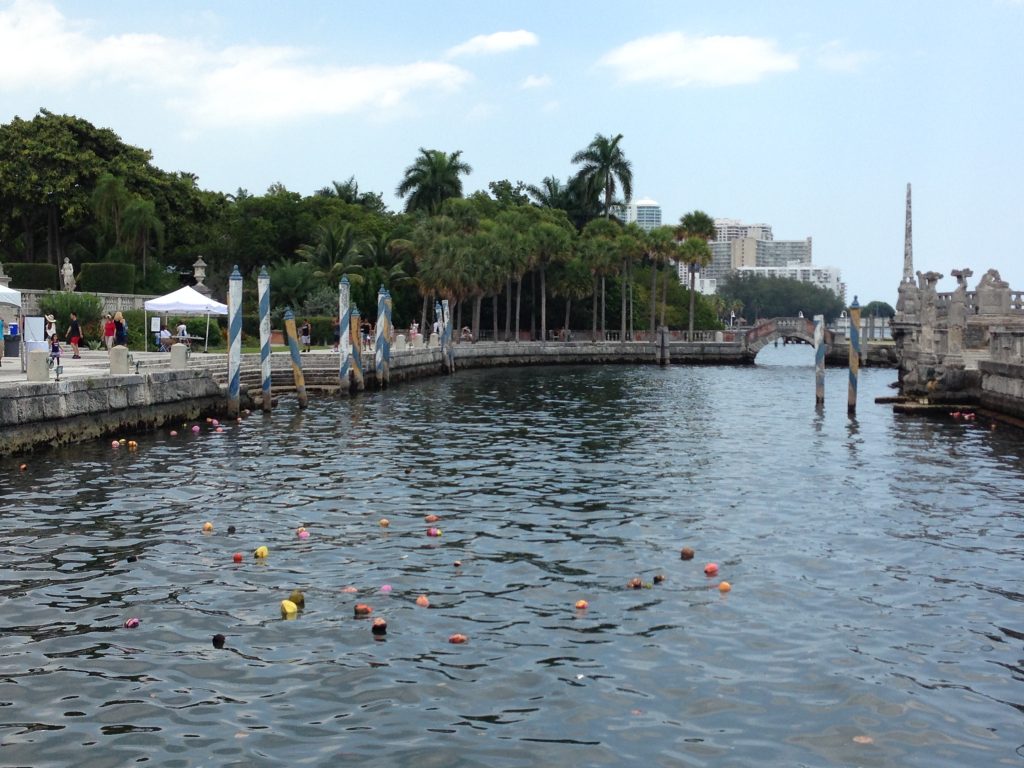 Scientists from the University of Miami, NOAA, Miami Waterkeeper, Urban Paradise Guild, and the Miami Science Museum were on hand to help guests identify the wide variety of species found in South Florida. 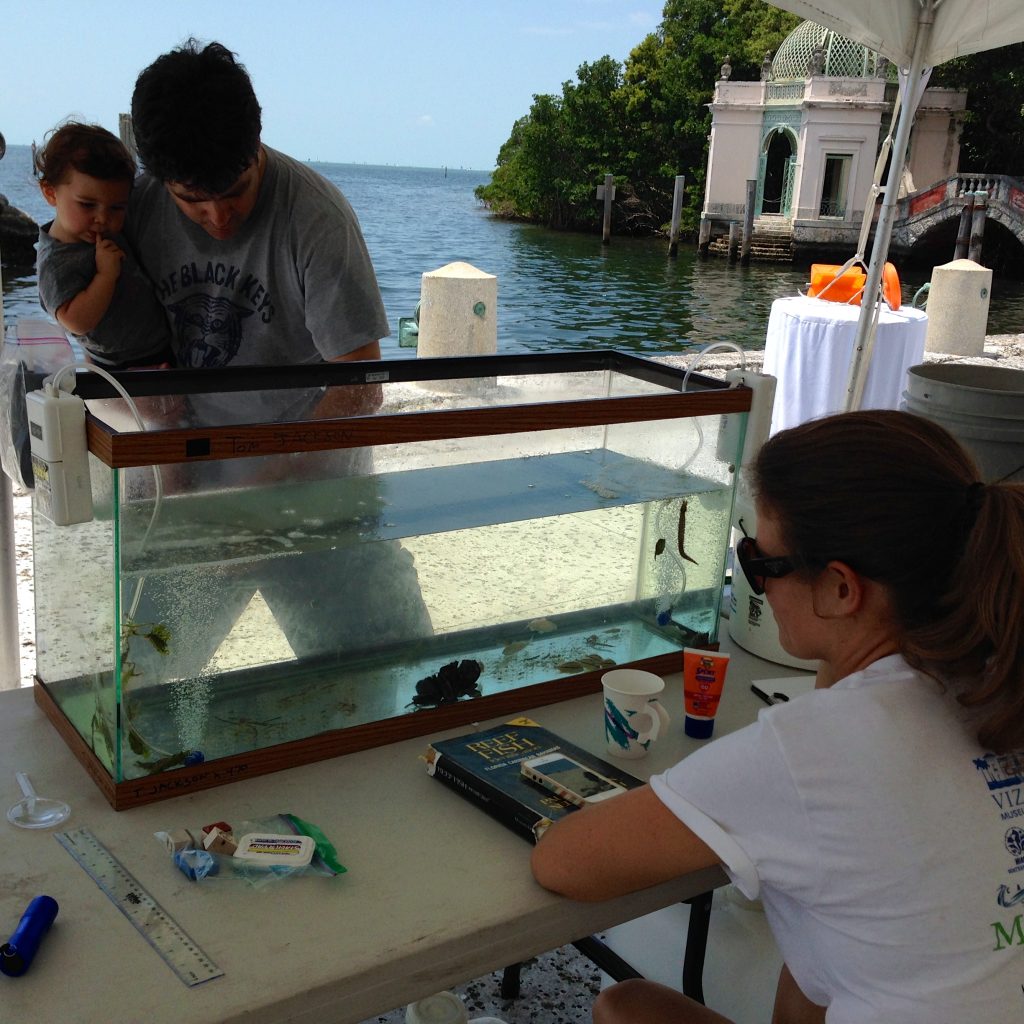 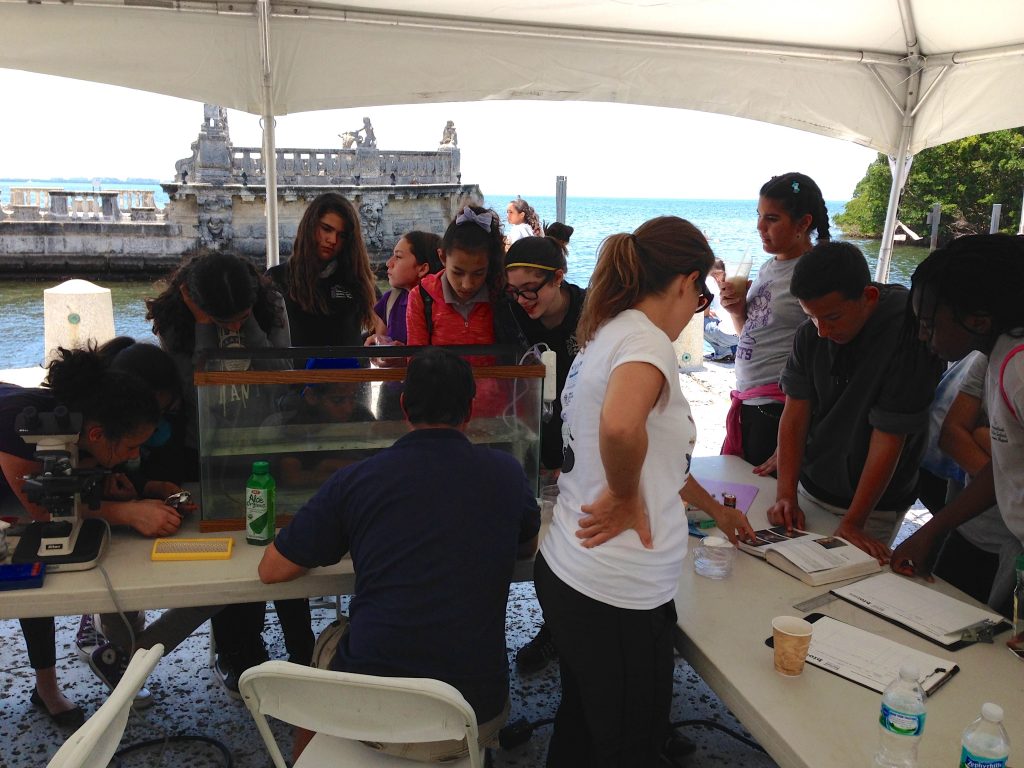 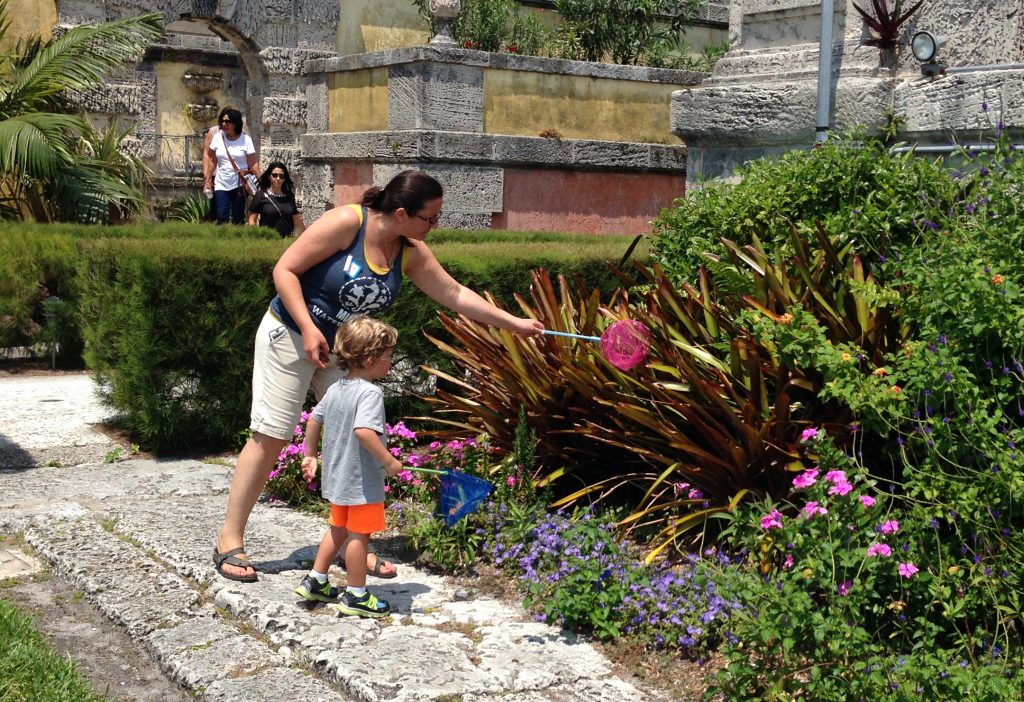 What’s next?  CARTHE, Vizcaya, and MUVE, with help from Miami Waterkeeper and local citizen scientists, will conduct a larger drift card study in Biscayne Bay.  Small wood cards will be released into Biscayne Bay with instructions on them to contact us if you find where they end up.  We will know where they were put in the Bay and where they were discovered, giving CARTHE scientists a better idea of how particles get moved through the water.  Check back for more information later in the summer.