The LASER, GPS-equipped, biodegradable drifters have been washing up on the beaches of the Gulf coast over the last several weeks.  We have been contacted by wildlife officials, park rangers, and citizens who have found the “floats” or top pieces of our drifters on barrier islands and coastal beaches in Louisiana, Mississippi, and Alabama.  The “drogues” or the underwater sails on the bottom have fallen off and are not landing with the floats.

By inspecting the floats 4+ months after they were released, we can learn about the rate of degradation, the amount of biofouling that accumulates if any, and reuse parts if possible.  As scientists, we are always working to create better equipment, perfect our research methodologies, and ask more questions.

Have you seen any of these?  Send us a photo by emailing lbracken at rsmas dot miami dot edu.

BEFORE.  Photo by Nathan Laxague/CARTHE 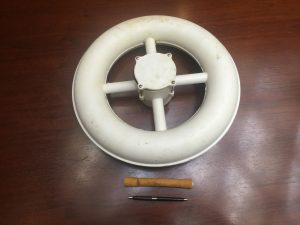 AFTER.  Photo by Gary Hopkins