Ocean currents are streams of seawater that flow in the ocean, and are caused by wind, gravity, earth’s rotation, and differences in density. Currents can carry animals, nutrients, and even pollutants with them as they move. Therefore, it is important for CARTHE scientists to study their movements so we can better predict how the currents will impact the transport of pollutants in the water. 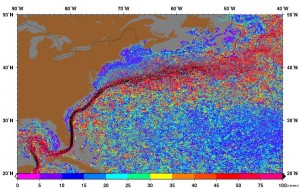 Major currents are seen in “ribbons” of red, pink, and black (speeds of over 100 cm/s in black). oceancurrents.rsmas.miami.edu

Mescoscale currents (like the Loop Current Eddy in the Gulf of Mexico and the Gulf Stream in the Atlantic Ocean) are the big highways of the ocean, carrying a lot of cars across large distances. It is a huge road, like I-95, so you cannot easily cross it and you stay on it for awhile (months) going roughly the same speed the whole time. The size and speed can be measured by satellites, allowing us to model it and do the important predictions we mentioned earlier.

Sub-mesoscale features are like the small streets in your neighborhood. Many cars use these streets everyday but only for a short amount of time.  They are so small and narrow, and cars turn to a new street so frequently that we could not observe them by satellite. And to complicate the matter, some of these roads are temporary.  Some are created and reinforced (by wind, river outflows, rain, waves, storms, etc), while others are decaying and being destroyed. The neighborhood is ever evolving. It makes it hard to measure and model…but we did it! 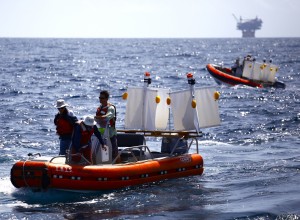 During our Grand Lagrangian Deployment (GLAD) experiment, we put over 300 GPS-equipped surface drifters into the Gulf of Mexico simultaneously and within 100m 10km of each other (the drifters are the cars in our analogy). We measured how fast the cars spread in these small streets, compared to how they spread using the highways.

We proved that the sub-mesoscale currents can dominate how a pollutant spreads in the short term. The trajectories of the drifters allow us to draw maps of the diverse routes that can carry floating material like oil at the surface of the Gulf of Mexico. For the first time, we could observe the role of both the temporary and the persistent currents on the dispersion of pollution.

For more information on the GLAD experiment, visit: http://carthe.org/glad/

For more information on our drifters, watch our video: http://vimeo.com/77146782

To read more about our findings, visit: http://gulfresearchinitiative.org/study-shows-drifter-data-surface-currents-critical-predict-pollutant-transport/