While assisting the SCOPE team conduct experiments on the research vessel, our group was also collecting bacterial samples directly from the sea surface and subsurface water about 20 cm deep. We are especially interested in bacteria that are known to produce and degrade surfactants (compounds that lower the surface

tension between two liquids) as well as those that degrade oil in the environment. Surfactants are produced by bacteria for a number of reasons, such as to help break up food materials during feeding or for aggregation purposes. When these surfactants accumulate on the sea surface under low wind speed conditions, they can suppress gravity-capillary waves and form sea slicks. These slicks are visible to the naked eye and can even be seen in satellite imagery. We look to compare the abundance levels of surfactant associated bacteria at the sea surface as well as from subsurface water in slick and non slick conditions to see how the communities differ. 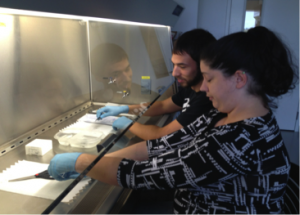 This is accomplished by sampling bacteria in the field using techniques designed to minimize contamination. Once the samples are collected, we then analyze the DNA that we extract from those samples back at the lab and perform PCR and Next Generation Sequencing techniques, which tells us what types of bacteria are present.

Real time PCR techniques are used when there is a very small amount of DNA being analyzed from a sample. This process creates many copies of a region of DNA if it is present, such as a region only found in types of surfactant associated bacteria. This amplification makes it easier for researchers to determine if a certain type of bacteria is present in a sample.

Using Next Generation Sequencing, we were able to read the base pair order of the DNA found in each sample. Once we obtained these reads, we could then compare them to sequence libraries in the scientific community to determine the types of bacteria that were present in each sample. This method makes it possible to obtain a picture of the whole community found in a sample, rather than the presence or absence of just one type of organism.

Certain types of marine bacteria are known to degrade oil in their environment and use it as an energy source. If there is dissolved oil in the water column that may not be visible on the sea surface, bacteria that are degrading these hydrocarbons and producing surfactants may give us a better idea of what organic materials are in that subsurface water. We are looking to link these bacteria to sea surface features that can be seen in satellite imagery.