By Philippe Miron and Laura Bracken

Offshore oil exploration, oil spill contingency planning, marine debris transport, stock assessment efforts, and fish larval movements are among the many activities that will greatly benefit from a recent study by scientists at the University of Miami’s Rosenstiel School of Marine & Atmospheric Science (UM) looking at ocean currents in the Gulf of Mexico (GoM).

Scientists with the Consortium for Advanced Research on the Transport of Hydrocarbon in the Environment (CARTHE), based at UM, have been actively deploying ocean surface drifters (specialized floats/buoys that track ocean currents) in the GoM for the past 5 years. These efforts have exponentially increased the data available to the scientific community. Combined with studies from other agencies, the drifter database now contains 3203 trajectories from 1994 to 2016, which cover most of the area of the GoM and the Caribbean Sea (see figure 1).

It combines GPS-equipped drifters from the following oceanographic expeditions:

Figure 1: On the left, a spaghetti plot of all daily satellite-tracked drifter trajectories describing the surface-ocean Lagrangian dynamics in the extended Gulf of Mexico. The grid used to construct a Markov-chain representation of the dynamics is shown in black. On the right, the number of drifters per grid bin independent of the day.

Using short-run trajectories from this large collection of satellite-tracked drifters, the researchers constructed a matrix of transitional probabilities of moving from one location to another inside the GoM.  How likely is a particle to move from one block to the adjacent block? This leads to a Markov-chain model – a model using only current observations to predict future events – of the surface ocean dynamics in the GoM that can be used to investigate long-term behavior in a statistical sense. For example, if you have an oil spill at a certain location today, the model will tell where the oil will tend to accumulate most.

As a result of their analysis, they have identified regions in the GoM (see figure 2) where tracers such as oil, plastic debris, plankton, and even fish larvae are attracted to and remain in for extended periods of time as well as the regions where those tracers originate from (i.e., their basins of attraction). This approach to ocean connectivity is conceptually very different from the traditional approach, which is based on a hypothesis, then splitting the domain and evaluating interconnections between the regions. The new model allows the scientists to extract the attraction zones and their basins of attraction that constrain the connectivity. This method can also be applied when studying the movement of  larvae or oil, as it is not based on the hypothesis of the initial subdivision.

The lagrangian dynamical geography, a new term based on the movement of the drifters across a geographic area,  is the combination of the various weakly interacting “basins of attractions” and it constrains the connectivity among distant regions in the GoM. The robustness of those provinces is highlighted in figure 3. The first row presents a tracer evolution from both sides of the main separation, the blue portion is evacuated outside of the GoM via the Loop Current while the red portion slowly converged to the western coast, similarly to the path of a Loop Current Eddy. The second and third row show tracer evolution starting inside and outside two of the refined regions, respectively the north and south West Florida Shelf. In both of those, the red tracer distribution is mostly enclosed inside the province’s boundary while the blue tracer is dispersed outside of the same boundary. 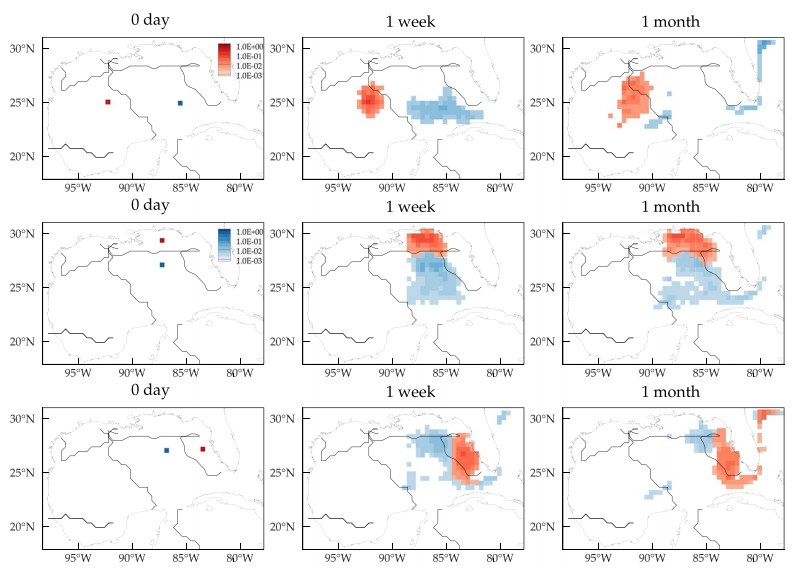 Figure 3: Each row presents the evolution after 0 day, 1 week and 1 month of tracers (red and blue) released at various localized regions. The source locations were chosen to straddle some of the dynamical province boundaries (overlaid in black).

This research has implications for offshore oil exploration, oil spill response, and fish larval connectivity among many other activities of practical interest. It also carries useful information for guiding activities dealing with hampering and/or palliating the effects of an oil spill or a harmful algal bloom or supporting stock assessment efforts and management decisions for fishing regulations, to cite some examples.

The GLAD (doi:10.7266/N7VD6WC8) and LASER (doi:110.7266/N7W0940J) drifter trajectory datasets are publicly available through the Gulf of Mexico Research Initiative Information and Data Cooperative (GRIIDC) at https://data.gulfresearchinitiative.org.

The CICESE—Pemex Caracterizacíon Metoceánica del Golfo de México project was funded by PEMEX contracts SAP-428217896, 428218855, and 428229851. The quality control and post-processing of the CICESE–Pemex data were carried out by Paula Garcia and Argelia Ronquillo.

This research was published in Scientific Reports on August 1, 2017.

Lagrangian dynamical geography of the Gulf of Mexico

Link to the online version: http://rdcu.be/uFvh