CARTHE returned to the Gulf of Mexico in January-February 2016 to conduct the LAgrangian Submesoscale ExpeRiment (LASER). LASER built upon the vast amount of data that was collected during the 2012 GLAD experiment. Our mission was to understand the submesoscale (small scale, temporary) ocean currents in the open ocean environment near the DeSoto Canyon, as well as how oil or other pollutants might be transported via these currents.

Our team spent several years preparing for LASER, the largest experiment of its kind ever conducted. LASER brought together an unprecedented collection of aircraft surveillance, remote sensing, real-time data-assimilating models, and advanced Lagrangian transport analysis methods operating in unison in order to guide massive Lagrangian sampling (with 1000 drifters and 10,000 drift cards) of those upper ocean processes controlling transport of hydrocarbons in the environment.

The centerpiece of the experiment will be 1000 custom-designed drifters, which have been perfected via extensive tests in the SUSTAIN laboratory as well as in the field. These new drifters are made from a biodegradable material and are equipped with SPOT Trace satellite trackers that transmit data back to our scientists for months.

Drifting in the Gulf – A Science Story by Waterlust from CARTHE on Vimeo.

A Ship-Tethered Aerostat Remote Sensing System (STARSS) contributed to the aerial monitoring of the surface of the ocean by acquiring high-resolution imagery. These images are being used to determine how small-scale mixing driven by waves, winds, and short-lived currents affect how tracers like oil spread and move over time. The drifters released during LASER are showing us what happens at scales of 200 m to many km, while STARRS will allow us to see what’s happening at scales of 1 m – 200 m. For more information on STARRS, please visit our aerostat blog post. 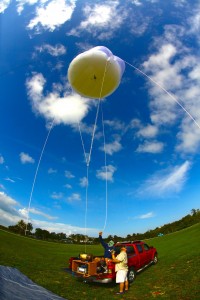