The CARTHE response to the Hercules 265 drilling rig explosion:

“This is an opportunity to put science into immediate practice.” – Tamay Özgökmen, University of Miami and director of CARTHE

The team launched 21 drifters around the Hercules rig in order to track the movement of the surface ocean currents, in order to predict where oil and gas would travel if it were spilled.  Luckily no pollutants were released from the rig, but this was an amazing test of our ability to respond in an emergency situation.

CARTHE was one of 5 GoMRI consortia involved in this project, teaming up with ECOGIG, CWC, GISR, C-IMAGE.

“The GoMRI network – knowing the expertise of other GoMRI consortia and the proper people to contact – made it possible to assemble a scientific ‘dream team’ in short order,” said ECOGIG’s Samantha Joye, who spearheaded this effort. 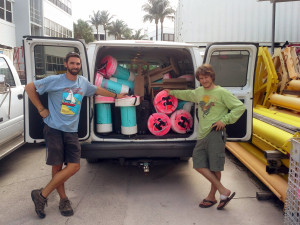 CARTHE students loading the drifters into the van before transporting them to Cocodrie, LA where they boarded LUMCON‘s R/V Acadiana. 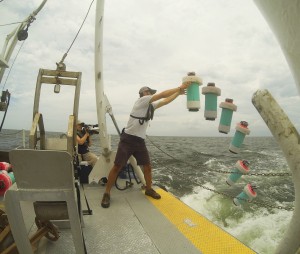 A time-lapse image of PhD student Conor Smith deploys a drifter from the R/V Acadiana near the site of the Hercules rig.