An essential part of being a successful team is having access to reliable resources. Thanks to our valued support, CARTHE has the privilege of working with exceptional, state-of-the-art equipment. These resources are crucial to conducting the advanced research that helps us carry out our mission.

Information about the CARTHE Drifter, can be found in these two articles:

To learn more about the CARTHE Drifter, please follow this link to Pacific Gyre.

The Rosenstiel School’s primary research vessel is the F.G. WALTON SMITH, named in honor of the School’s founder. The Smith, which was designed to the school’s specifications, was built in 1999 and placed in service in February, 2000.

The state-of-the-art 96-foot-long catamaran is capable of reaching speeds of over 10 knots and has a draft of only 7 feet. This shallow draft enables it to explore heretofore inaccessible areas such as reefs, mangroves, grassbeds, and other shallow environments. The vessel accommodates 20 people in its ten two-person staterooms and encompasses 800 square feet of laboratory space, as well as an additional 800 square feet of multi-use space astern. Constructed by Eastern Shipbuilding Group in Panama City, Florida, the catamaran boasts twin Cummins engines at 760 hp each, Servogear variable pitch propellers, a 3,000-gallon tank of fresh water plus a reverse osmosis water maker, and 10,000 gallons of fuel storage. 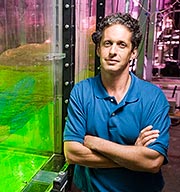 Upon its completion in January 2014, CARTHE PI’s will have to opportunity to conduct studies on the air-sea interface in the newly constructed SUrge-STructure Atmosphere INteraction (SUSTAIN) facility at the University of Miami. This unique wind-wave facility will be capable of generating Category 5 equivalent winds (50 m/s at level of 50-cm above water surface) over saltwater in a controlled test environment. Additional test facilities  that have been developed through CARTHE are available in the laboratory for studying an air-oil-water interaction in high winds. 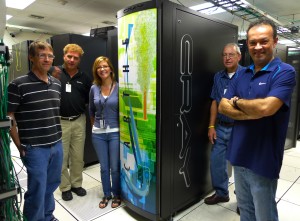 CARTHE has a new Cray XE6 supercomputer based on 12-core 2.2 GHz Magny Cour CPUs with a total of 960 cores and a fast interconnect for parallel computing. This  machine is used exclusively for large eddy simulations of  the near-field turbulent plume, which are  very time consuming because of the need for resolving a wide range of turbulent processes. This supercomputer  provides in excess of 8 million core hours per year to CARTHE near-field researchers without any significant  queue and data transfer time, which is a very high allocation to  attain otherwise from any data center.